Is Visual Studio Code Good For An …by Kendall Chen2 years ago, 1 Reply
Rated 5 out of 5

This project shows you how you can drag and drop elements within and across different structures in WPF.

You can download the code or see the latest code at GitHub.

Below is the class diagram of the application: 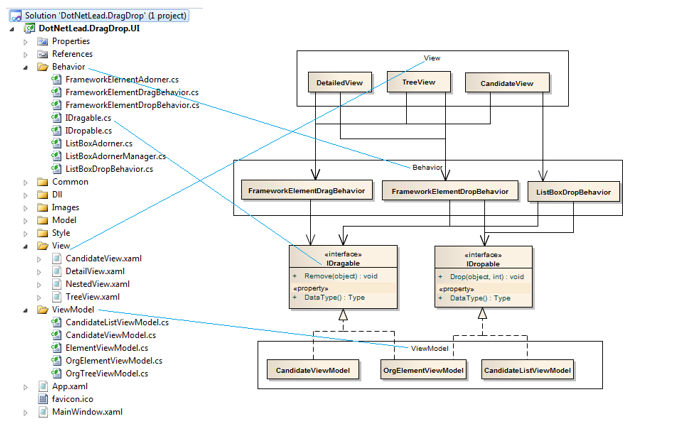 Starting from the bottom and going up, In the ViewModel section:

Starting from the bottom and going up, In the ViewModel section:

In the Behavior section:

With this setup you can just add the xaml to the View and the drag and drop functionality will come alive:

The main idea on the drag is to pick up the data that will be transferred as well as defining the data type that is transferred. The data type lets the system tell if the item can be dropped when the mouse moves over a particular area.

In the IDragable interface we have the following:

The DataType property returns the type of the data that is being dragged.

The Remove method removes the source data for a move operation. If it’s a copy operation then you simply don’t call it. In our application we will only implement the move operation per our business logic, though you can add the copy functionality if you like.

ElementViewModel is the parent class of both ViewModels, which contains common properties such as the FirstName and the LastName. This allows you to drag items between the two types interchangeably: 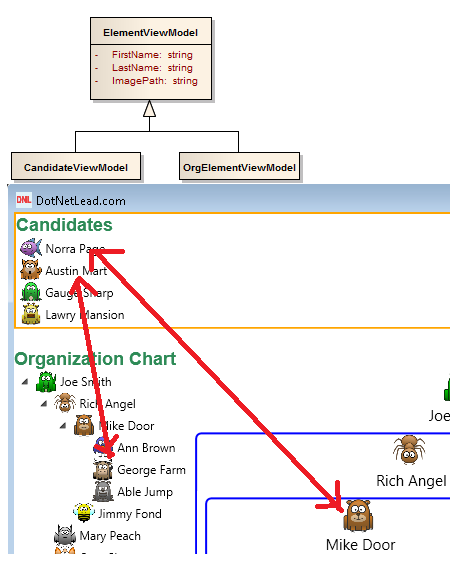 Next we define the drag behavior, meaning what would we like to do when a drag occurs. The FrameworkElementDragBehavior class inherits from the System.Windows.Interactivity.Behavior class, which allows you to define the actions that you like to perform for events such as a mouse click or a mouse move. Below is the code:

If the mouse is clicked down (and kept down) and moves out of the area then we start the drag operation. When you have nested controls such as the detailed view of the organization chart this is the most reliable way to detect the drag. If you don’t have nested controls you may just use the MouseMove event and check the mouse pressed state from MouseEventArgs.

In the MouseLeave event we check the DataContext of the UI control and see if it implements IDragable. If yes then that means the item can be dragged.  We then get the data type being dragged by calling the IDragable interface and start the drag operation by calling System.Windows.DragDrop.DoDragDrop method.

To enable the drag operation we simply add the xaml to the View for the control that you would like to drag. For example in the TreeView we defined the following to drag the StackPanel from the TreeView:

And the same goes for the Detailed View:

and the Candidate View:

The goal of the drop operation is to:

Below is our IDropable interface:

The Drop method adds the data to the target. The optional index parameter is for the location of the drop such as a ListBox which we will cover in the next section. Since the ViewModel implements this interface, the method simply calls the business logic in the Model. You can look into the source code if you are interested on the business logic implementation.

In the DragEnter event we record the data type that can be dropped into this area (so that we can decide the visual cues to give), and we initialize the adorner for displaying the red dots around the corner:

In the DragOver event we will decide if the data type can be dropped. If yes then we need to show the mouse cursor as an item that can be dropped plus drawing the red dots around the corner of the destination by calling the adorner:

In the DragLeave event we remove the red dots around the corner by calling the adorner:

And that’s all the behavior we need to define. By adding the xaml tags to the View and we can drop the items into any FrameworkElement:

Now we show you how to drop items into a ListBox. 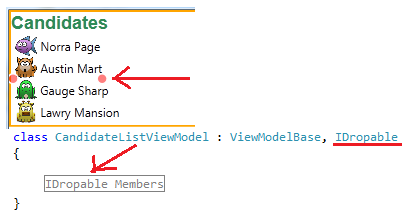 Next we write the ListBoxDropBehavior class with the events that we would like to handle. The events are the same as those defined in the FrameworkElementDropBehavior class but the code is made specifically for dropping items into a ListBox:

In the DragEnter event we initialize the adorner layer to be the area covering the entire ListBox, this is so that we can add and remove adorners for individual items in the ListBox:

In the DragOver event we need to show the red dots above or under the item that we will be dropping over. We first get the UIElement that is dropped over from the mouse position relative to the ListBox, then determine if it is above or below the item and call the adorner manager to update the red dots:

Since the DragOver event is executed continuously when the mouse is over the area, we need the update of the adorners to be efficient. In the Update method of the adorner manager we simply exit the method if no change is needed, otherwise we clear the old adorner and draw a new one:

In the DragLeave event we clear the adorner from the ListBox:

And that’s all. Just add the xaml to the CandidateView and you can then drop items into it: 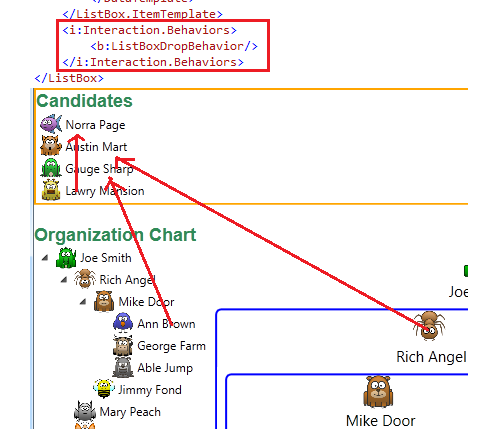 Although there are a lot more things that you can do, we hope you find this project helpful in implementing your own WPF drag and drop applications.

You must be logged in to submit a review.